Having already played a ton of the Jimi Hendrix video slot, I had high expectations of the last title in the NetEnt Rocks series: Motörhead. The video slot is a tribute to one of the most underrated heavy metal bands in music history. A lot of people associate heavy or thrash metal with bands like Metallica or Megadeth. What these people don’t know though was that these bands couldn’t have achieved the success they enjoyed were it not for Motörhead’s trailblazing work in the late 70s. Aside from being innovators and pioneers, the band was also known to make songs that centered on gambling. In fact, one of their earliest hits was a song titled Ace of Spades (which was also a track in the album of the same name). So how was the video slot’s gameplay like? 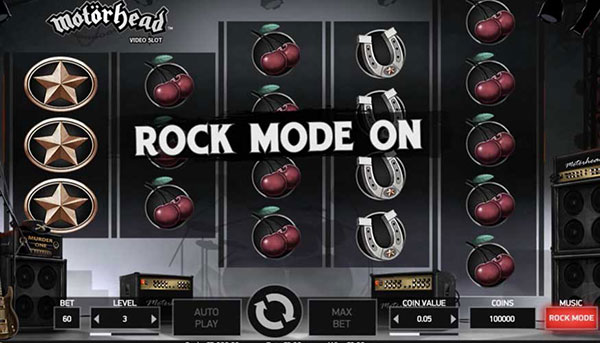 There aren’t many video slots that can boast of being enjoyable and rewarding at the same time. The Motörhead video slot is an exception to this. It has a unique 5-reel format that allows for 76 betting lines. In addition to these pay lines, the slot also boasts of Mystery Reels and a Bomber Feature that are designed to be rewarding for players. For every a spin a player makes during the regular game, he/she can expect to have at least 1 Mystery Reel. What’s great about this feature is that the Mystery Symbols on these reels will usually turn into regular symbols (except Scatters). As for the Bomber Feature, this usually activates randomly before a spin. When in effect, the player will be given at least 10 mystery symbols. Once these symbols are in place, the slot will then start spinning. Like with Mystery Reels, all mystery symbols in the Bomber Feature will turn into regular symbols after the spin. Other than these the video slot also has special features such as Free Spins and Wild substitutions that further reward anyone who chooses to play.

Visuals and the soundtrack are great!

Another feature of the Motörhead video slot that makes it enjoyable to play is its visuals and background music. Like other titles in the NetEnt Rocks series, this video slot has an intro that’s sure to make Motörhead fans wax nostalgic and regular players feel hyped. This intro is of the band playing Ace of Spades live and was directly taken from the their “The World Is Ours” DVD. After this, the player is also given the option to play 3 other Motörhead songs during the main game by clicking on the Rock Mode toggle button. As for the graphics, they might be in 2D but they perfectly complement the aesthetic of the band. The symbols also reference a lot of the bands songs (e.g. Ace of Spades for the Wild symbol).

Overall, I really liked how the NetEnt was able to bring something new to the table with the Motörhead video slot. Similar to how I felt before I played the Jimi Hendrix slot, I was quite apprehensive that the company would somehow butcher the band’s name. Thankfully, they were able to do more than just justify the existence of this video slot. Like when the band first came out in the 1970s, I’ve no doubt that NetEnt has also broken new ground with the video slot’s enjoyable gameplay and rewarding features.