If its great casino games that they’re looking for, operators and players will love what Nolimit City has to offer. While it is relatively new, this casino game development company already has a great portfolio of titles under its belt. The company was able to put up these titles thanks to a team of gambling industry professionals with more than 10 years accumulated experience among them. Aside from its casino games and its development team, what also sets the company apart is its focus on making their platform as independent as possible. This then allows the company to deliver special features as well as bespoke marketing tools straight to their clients: the online casino operators. Founded in 2014, the company’s headquarters is in Stockholm, Sweden while also maintaining an office (likely for licensing) in Hamrun, Malta.

Even though the company is still in its 3rd year, Nolimit City has already designed its own platform for its games. This means that unlike most of its competitors that are still starting out, the company is able to provide a better experience (through their platform) for operators and their players. With this platform, not only will operators be able to offer the company’s games to players who use mobile and/or desktop devices, they (the operators) will also have an easier time integrating games from other sources as well as monitor their online casinos more efficiently.

As of now, Nolimit City’s casino games portfolio is still pretty limited. The majority of the titles that they’ve been able to develop are video slots. Kitchen Drama: Sushi Mania is a video slot that boasts of quirky and cute graphics to go along with rewarding gameplay that has features such as Wilds, Free Spins, and a unique Second Chance feature. Another slot that players might like is Oktoberfest. Much like Sushi Mania, this Oktoberfest-themed video slot has excellent artwork and graphics. Gameplay-wise, it’s a bit different with features such as free spins (Bierspins in game), random Party Spins, and Prost Spins that result in the appearance of expanding Wild symbols. If they’re looking for a video slot with a sci-fi theme, players and operators might want to check out the company’s Space Arcade title. Visually, the video slot looks amazing with its 3D graphics and effects. In terms of gameplay, it might be the most rewarding with features such as Winged Wild Mode (grants respins) and win multipliers that can go up to x6 (the player’s bet). Rounding out the company’s current lineup of video slot is Creepy Carnival, a cartoony horror themed title that has Wilds, Free Spins, and a Star Spins feature to help improve players’ chances of winning big. Other than these, the company also has lottery and video poker games such as Poker, Lucky Cards, and Lotto 36 Balls. Each of these titles have two variations, one for Common Draw and the other for Instant play.

Thanks to its casino games and an intuitive casino gaming software platform, Nolimit City is shaping up to be one of the top casino game development companies in the industry. Whether you happen to be an operator or a player, you won’t be able to deny the quality of the company’s casino games. From art and graphics to gameplay, these casino games (particularly the video slots) can easily rival titles from more established casino game development companies. As a testament to just how good their casino games are, the company has already made a number of partnerships with some of the largest online casino operators that target the Nordic region. A few of these online casino brands include Folkeautomaten, Casinostugan, Suomikasino, Mobilautomaten, Mobilebet, and more recently, Starfish media, SlotsMillion, as well as the Kindred Group. It’s truly amazing how far Nolimit City has come considering it’s only been around since 2014. 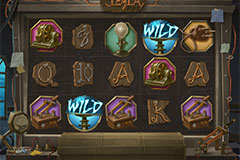